Laufen launches
I AM A CINEMA

Premiering at Art Basel, Laufen launches I AM A CINEMA, its new cultural commitment dedicated to art films. I AM A CINEMA is also the name of the pop-up cinema that LAUFEN developed in order to bring the art films easily to various places and to create a special viewing experience. Swiss architects Fuhrimann Hächler, who for the past three years have also staged LAUFEN’s trade fair and exhibition booth, designed a temporary structure of plywood boards for quick assembly and dismantling. With its elevated front façade bearing the inscription I AM A CINEMA and its light garland, the film box humorously overstates its size and importance, referencing the now iconic notion of “decorated shed” coined in late 1970s architectural theory. 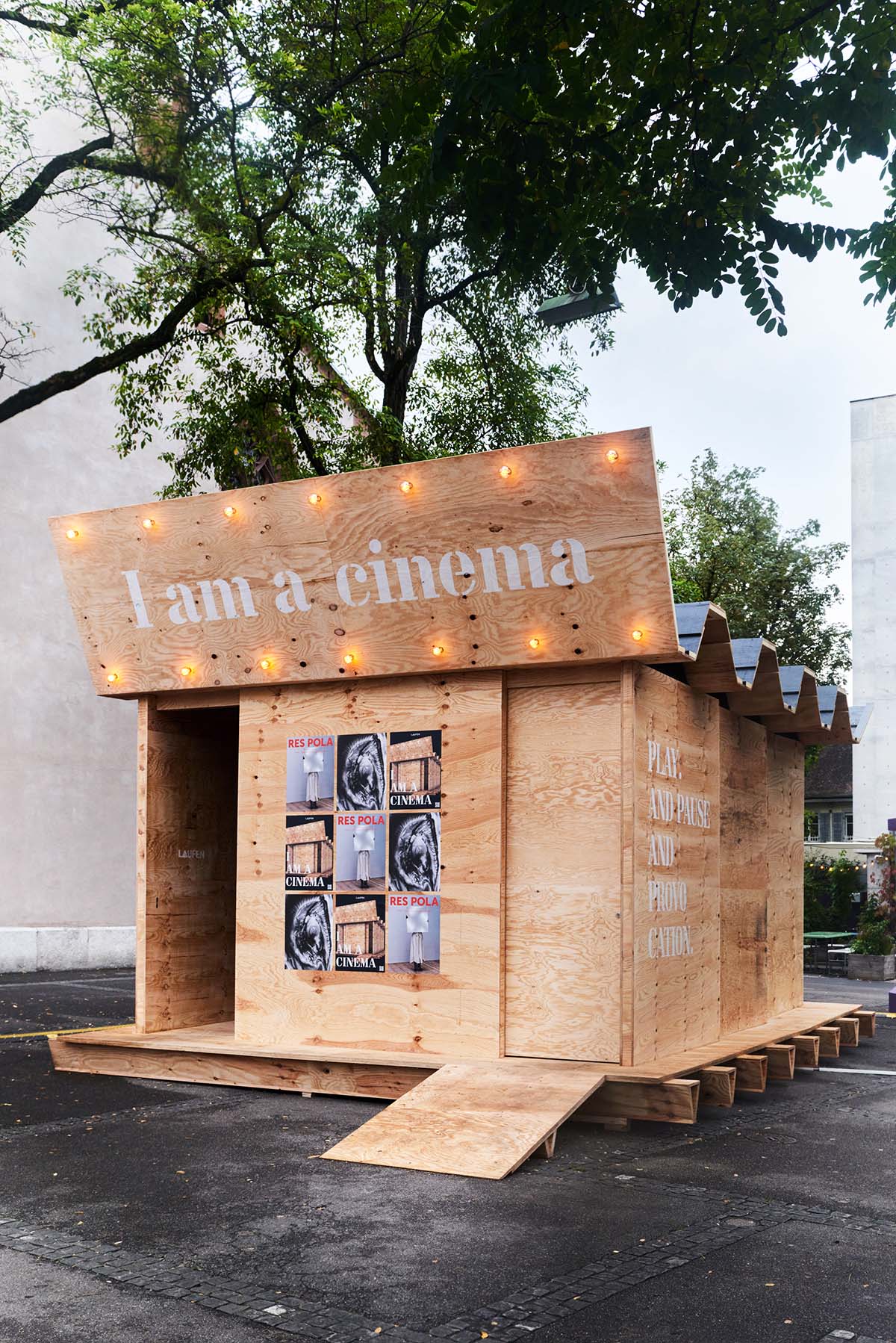 Res Pola
A film by
Artist Pola Sieverding and
film maker Marc Comes
Presented by Laufen
on the occasion of ART BASEL
20–26 September 2021
10am - 09pm     Free Entry
RES POLA
will be presented in the pop-up cinema
I AM A CINEMA
by architects
Fuhrimann Hächler
private view
Art Basel Week
Claraplatz, 4058 Basel 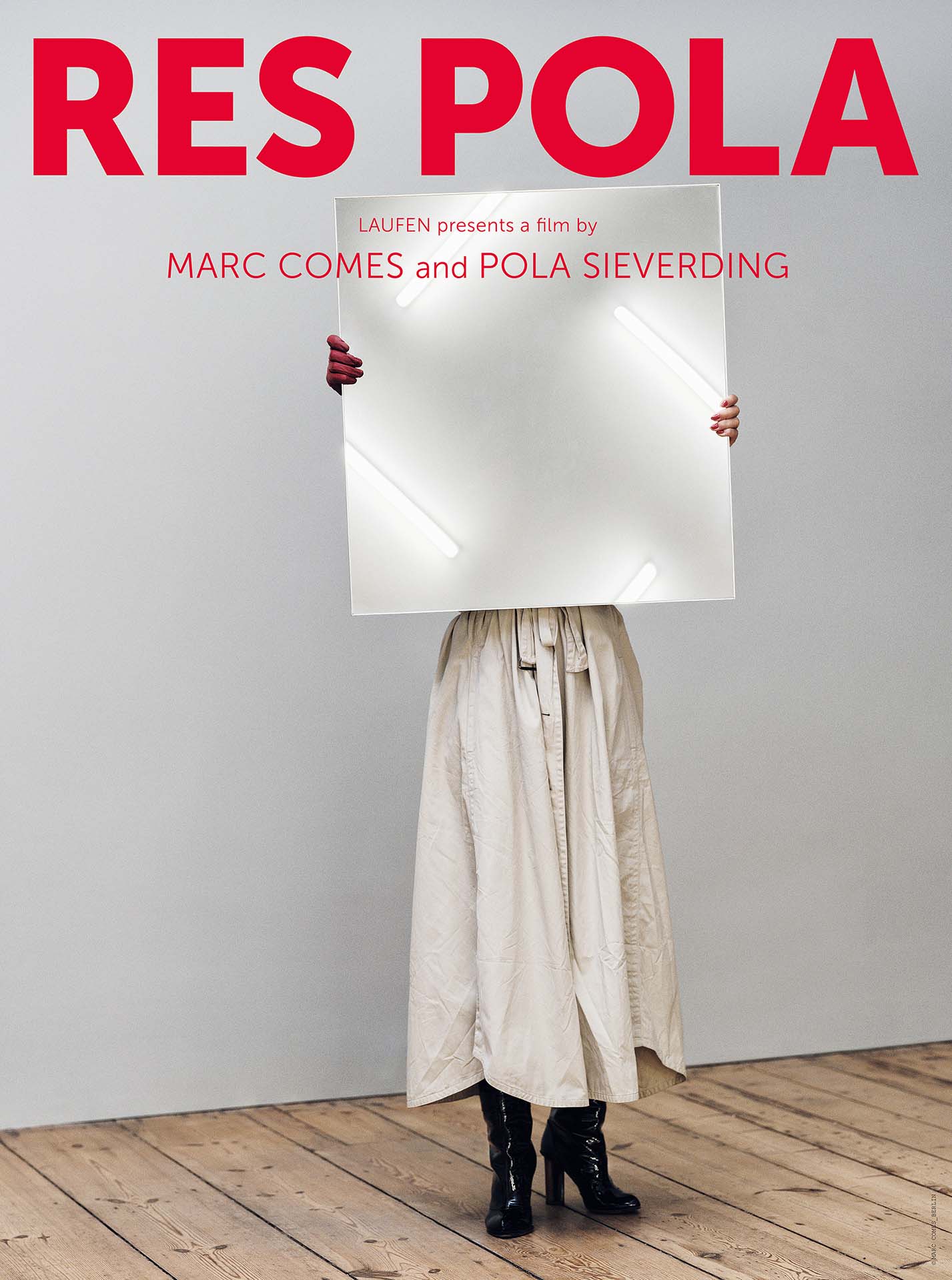 The film portrays a female protagonist moving through a large city. Playing knowingly with this change in perspective, the film deploys a repertoire of possible readings and is filled with symbols of physicality and sensuality such as gloves, mirrors and oysters.

RES POLA is Sieverding’s first time in front of as well as behind the camera. Sieverding’s past film and photography work provides a many-faceted investigation of the human body, taking the guise of antique torsos, wrestlers or protagonists of various subcultures staged with her camera. Inexorably, the potential of the body and its desirability comes to the fore. Sieverding’s practice is driven by the notion of portraiture, which she uses to provide a rich array of possible gazes and readings.
‍
Marc Comes’ cinematographic language centres on narratives around a person or an object. As a director, he has collaborated with artists on several film projects. For a number of years now, he has also conceived commercial and promotional films for LAUFEN. His 2017 image film “Ode to Kaolin” won him several prestigious awards such as a Silver Dolphin at the Cannes Corporate Media & TV Awards and a Silver Edi at the Swiss Commissioned and Commercial Film Awards. RES POLA is the result of an inspired and inspiring collaboration between Comes and Sieverding.

LAUFEN has a long tradition of cultural commitment

With I AM A CINEMA, as a format dedicated to art films and to be filled with collaborations with artists, LAUFEN marks a new chapter in its cultural commitment.
However, LAUFEN’s cultural commitment is a long-established tradition: for the past decade, the company has been a partner of ProHelvetia’s Salon Suisse at the Venice Biennale. In 2017, it launched a travelling exhibition entitled “A Curated Art Show. What?”. With I AM A CINEMA, LAUFEN establishes its own long-term format with a view to offering artists a platform to engage with and freely interpret LAUFEN’s content. LAUFEN is thus laying the foundation for a collection that will be steadily enriched under the heading I AM A CINEMA.
“I am particularly pleased with the launch of I AM A CINEMA, Laufen’s new long-term format for art films that will now steadily be filled with life. It has been an extraordinary experience to witness the development of RES POLA up close.”
Roger Furrer, Global Marketing Director LAUFEN
© 2021. All rights reserved
laufen.com
Imprint
Legal